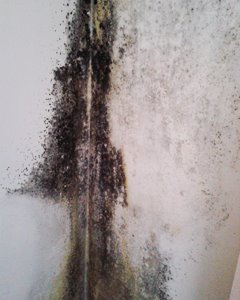 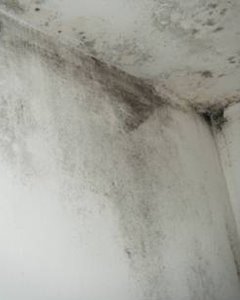 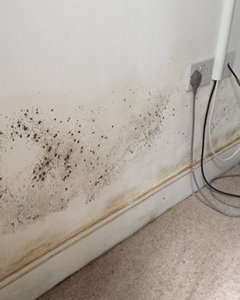 Damp can cause MOULD on walls and furniture and make window frames rot. Damp, cold dwellings encourage the growth of mould and mites which can increase the risk of respiratory illnesses in some people. Some damp is caused by condensation. This guide explains how condensation forms and how you can keep it to a minimum, so reducing the risk of mould growth.

There is always some moisture in the air, even if you cannot see it. If the air gets colder it cannot hold all the moisture and tiny drops of water appear. THIS IS CONDENSATION. You may notice it when you see your breath on a cold day, or when the mirror mists over when you have a bath. Condensation occurs mainly during cold weather, whether it is raining or dry. It does not leave a ‘tidemark’. It encourages mould growth in places where there is little movement of air. Look for it in corners, on or near windows, in or behind wardrobes and cupboards. It often forms on north-facing (coldest) walls.

Wipe down affected windows and sills every morning. Wring out the cloth rather than drying it on a radiator - drying on a radiator would simply put the moisture back into the air. Condensation channels and sponge strips can be bought at DIY shops. They are fitted to windows to collect the condensation and thus help prevent window frames from rotting and avoid damp forming under the sills. Care must be taken to fit these devices properly.

First treat the mould already in your home. Once you deal with the cause of the dampness and remove the mould, it should not reappear. To kill and remove mould, wipe down walls and window frames with a fungicidal wash which carries a Health and Safety Executive ‘approval number’. Follow the manufacturer’s instructions precisely. Dry-clean mildewed clothes and shampoo carpets. Disturbing mould by brushing or vacuum cleaning can increase the risk of respiratory problems. After treatment redecorate using a good quality fungicidal paint to help prevent future mould growth. Note that this paint is not effective if overlaid with ordinary paints or wallpaper. When wallpapering, use a paste containing a fungicide to prevent further mould growth. Remember: The only lasting way of avoiding the return of severe mould is to eliminate dampness.

How to avoid Condensation

When Cooking, reduce the amount of moisture escaping into the air by covering pans and do not leave kettles boiling.

Use your extractor fan if fitted. Do not use Paraffin or portable flue-less bottled gas heaters as they put a lot of moisture into the air.

When Washing Clothes, dry them outside if possible. If you have to dry them inside, do so in the bathroom with the door closed

and window open or extractor fan running. If you have a tumble dryer, make sure it is vented outside.

You can ventilate your home without making draughts. Some ventilation is needed to get rid of moisture being produced all the time, including that from people's breath. Keep a small window ajar or a trickle ventilator open at all times if possible. You need much more ventilation in the Kitchen and Bathroom when cooking, washing up, bathing and drying clothes. This means opening the windows wider and ideally using an extractor fan, such as a humidistat-controlled fan which operates automatically when the air becomes humid and is economic to run.

In cold weather, keep your heating on low and constant in all rooms to minimise rooms with air colder than the rest of the house.